Memnon runs since 2004 a complete NOA N6000 workflow system for the realisation of
- the digitisation contract “concours de la reine Elisabeth”.
- the British Library contract
and many others.
Moreoever a specific Uniport workflow system which analyses faulty audio files against audio quality errors was put into place where any kind of digital born material can be scanned in 4 times real-time.

Michel Merten, CEO from memnon says: "We do expect a rapidly developing new market for digitisation services and are facing already several contracts now. The existence of the NOA tools within broadcasters, which dedicated themselves to the task of safeguarding audio archives, with low TCO together with the accuracy of the quality control of the NOA were convinced us of the validity of the NOA approach.” Hervé Blieck, archiving studios lead engineer, adds: “The separation of the digitisation stage from the quality control is also a key element for us as it allows a separate quality control step without slowing down the digitisation process and without lowering the highest quality standard required for scientific or musical archives digitisation ”.

Several 10.000 carriers have being digitised within the last years. This includes the use of 3 dedicated tapes machines running in parallel on one NOA station, as well as other sources players (shellacs, direct cut records, vinyls, CD’s and CD-R’s, DAT’s, U-matic, PCM-F1, …), the automatic production of 30 sec snippets for pre-listening purpose, and the integration in the existing network structure. 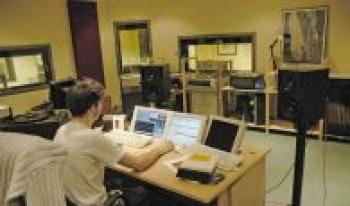