ORF adds four CD-Lector systems to gain a total of 20 parallel lines for high-speed CD digitization. The MediaButler tool enables the systems to produce different resolutions on the fly, from resampled 48-kHz BWF files to MPEG-1L2 and FLAC files. Both CD-Lector and MediaButler operate as an extension of NOA’s jobDB™ workflow generator and integrate with ORF’s two existing NOA Record systems, which are already installed in the ORF facilities and connected to ORF’s main audio archiving system, KoKo.

“We’ve had good success with our two NOA Record workstations over the past four years, having digitized more than 76,000 tapes with an acceptable human effort,” said Harald Lessnig, senior engineer, Broadcast Systems at ORF. “Now that we need to tackle digitizing around 150,000 CDs, we decided to extend the jobDB™ workflow system with four CD-Lector systems from the ingestLINE™ and actLINE™ product lines.” 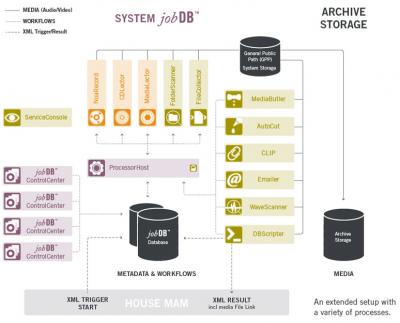 CD-Lector is a mass CD-ripping system that can handle up to eight parallel streams. Designed to extract audio from CDs and convert into digital audio objects with perfect control over interpolation, CD-Lector can deliver optimal results even for heavily damaged items. In most cases, digitization requires no hands-on operation. With the addition of MediaButler, a tool from NOA’s actLINE product line, the systems can actively retranscode files from linear format to many other formats.

“A demo proved that CD-Lector integrates simply and easily with our existing main audio archiving system, which allows for track-split and partial concatenated extraction of our legacy CD archives, with practically no programming effort,” said Christian Sodl, team leader, Production and Continuity at ORF. “That flexibility is one of the most important factors to us.”

More information on NOA products is available at www.noa-archive.com, via email at office@noa-archive.com , or by telephone at +43 1 545 2700.

About Österreichischer Rundfunk
Österreichischer Rundfunk (ORF) is the Austrian public service broadcaster. ORF television and radio stations are broadcast terrestrially and via satellite, and streamed over the Internet. ORF operates seven television channels, and its 12 radio stations offer a news and culture channel, a pop music channel, an alternative/youth culture channel, and nine regional channels.